Botbitz 85A (TZ85) Controller Tear Down

The Botbitz 85A controllers (or TZ85s as they are commonly refered to) are a widely used controller (ESC) in the featherweight class of combat robots (13.6kg/ 30lbs), and are well known for being very robust. The ratings they are given is 85A at 24V with a 5.5V 5A BEC. In this review I will tear it apart and see if those numbers make sense.

The Botbitz 85A controllers start life as a brushless controller known as a Turnigy Brushless ESC 85A. These are then reprogrammed to use only 2 of the 3 output channels for controlling brushed motors. As such there are quite a few unused components in the Botbitz 85As, which makes doing repairs a little easier as they come with their own spare parts!

Above is a Botbitz 85A more or less as it comes. It has a fairly solid case with a reasonably large heat sink. 4 screws hold the whole lot together.

The controller's made up of 2 boards; a signal processing board and a power board. In theory this is good design, as it separates the high and low current halves of the circuit which helps keep electrical noise to a minimum, however it makes heat management a problem as can be seen here:

There are MOSFETs on both sides of the power board, but only one side is touching the heatsink. This means the heat from the upper FETs has to travel through the board and the lower FETs to get out of the controller. There's a tiny square of aluminium sandwiched between the two boards, whose  main purpose seems to be to draw heat away from the DC-DC converter for the 5A BEC.
The stacked boards also makes repairs a pain, as they are hard soldered together via a set of pins at either end, which are very difficult to remove without breaking the board. Below is a dead one that has been cut open:

As you can see, the FET board is much the same on both sides. There is a space for an extra MOSFET on each channel, however my guess is that they found the rather skinny power tracks burnt out before the 4 FETs did, so they decided to leave out one on each row to save money. The signal board has the 3 FET driver chips and their associated components on the underside.

MOSFETs - These are responsible for switching the motor current, and their ratings are usually the main dictator of the controller's max current and voltage ratings.
The type of FETs used seems to vary between controllers as can sometimes be the case with these cheap brushless ESCs. The two types I've seen so far are IRFH5301s and NTMFS4833N.
The rating for the IRFH5301s is given as 28A at 70 degrees C, which multiplied by 3 and with a little bit of generous rounding gives the 85A rating, which seems a fairly accurate rating assuming the heat can get out of the controller fast enough. However the rating for the NTMFS4833s is 28A at 25 degrees C. At 85 degrees C which is a more realistic operating temperature after a bit of use, that rating would drop to around 60A.
Both these types of MOSFET have a voltage rating of 30V, so the 24v rating is realistic as long as there's no big voltage spikes.

Input Capacitance - The input capacitance provides a solid supply of current to the controller to allow it to switch rapidly without causing large voltage spikes. on the Botbitz 85A, this consists of a pair of 35v 220uF electrolytic capacitors in parallel. 440uF is rather low for this type of ESC (1000uF+ would be more suitable), but capacitors cost money and take up space, neither of which are desirable in cheap brushless ESCs.

MOSFET Drivers - These dictate how hard the MOSFETs are switched on and off; the higher the current used to switch the MOSFETs, the faster they switch and so the less heat is generated due to switching losses.
The MOSFET drivers used in the Botbitz 85A are IR2101 half bridge drivers. With a switching current of only around 200mA, the FETs are going to be switching fairly leisurely; a 1A driver would be more suitable for this type of controller. However this leisurely switching probably lowers the need for larger input capacitors, so may well be another exercise in cost saving.

Voltage Supply - One of the more complex parts of an ESCs design is often creating the various voltages required to run the different parts of the controller as well as external electronics like the receiver.
Below is a block diagram of the voltage regulation in the Botbitz 85As: 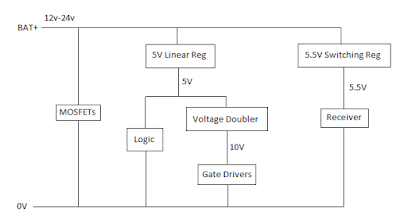 The general design of the system is quite good, as it has a separate regulator for supplying the voltage for the receiver, rather than having it all run off the same 5v line as the logic as can sometimes be the case. This means that any noise or voltage spikes from the receiver and other external electronics doesn't effect or damage the ESC's main logic circuits.
The 5.5v switching regulator takes up almost half the top side of the signal processing board, with the most obvious feature being the large 6R8 inductor in the centre. A DC-DC converter chip is used to drive an 8 pin MOSFET (the part number of which seems to be different on each controller I look at). The rest is all just voltage smoothing, with a second inductor and three big 47uF tantalum capacitors.
This supply is designed for running large 6v servos, and is way overkill for the usual task of running a receiver in a combat robot. As such, I'm not going to test whether it can actually supply 5A, however it certainly appears to be able to supply a fair amount if needed.
Two of the most common failure modes for the Botbitz 85A are with this 5.5v supply circuit. The large 6R8 inductor can fall off due to excessive G forces on the controller. Also, the DC-DC converter chip dies when two Botbitz 85A are used and the 5.5v lines are connected together; the DC-DC converter chips then try regulating each other, at which point they over load and usually blow a hole in themselves. Both these faults are usually quite easy to repair fortunately.

I was initially dubious about the logic supply; a small LM2940 1A 5v linear regulator is used to step all the way from 24v to 5v. This would usually lead to a very hot regulator, but in this instance the logic circuits draw so little current that it stays almost completely cold. The maximum voltage for this regulator is however only 26v, so it's fairly close to the limit at 24v.
The 5v rail is well decoupled with a small ceramic capacitor (probably 100nF) and a pair of 10uF tantalum. All the 5v tracks are in one small corner of the board, which also helps keep noise down. All round quite a good design.

The gate voltage is supplied by a very small 6 pin IC on the underside of the signal processing board with a useless part number. It appears to be a voltage doubler chip given the components around it and the fact it runs off the 5v line and gives a 10v output. 10v is a little on the low side (12v is more typical), but it is quite an efficient and neat solution to providing the gate voltage in a robust manner. The average current drawn by the gate driver chips is fairly tiny, so a simple solution such as this is adequate.

Processor - Standard ATMEGA 8A as used by many brushless ESCs. It seems to be the cheapest processor you can get which has all the necessary peripherals whilst also having just enough processing power and memory to control a brushless. However it has been reprogrammed for driving brushed motors, which makes a lot of its features redundant.

Overall, the Botbitz 85A is quite a well designed ESC given it's price. The current rating seems a little optimistic once switching loses and heat management is taken into consideration; 60A continuous with 80A burst would probably be more realistic, however this is still way more than most featherweight robots require. The maximum voltage ratings seem to be reasonably accurate, although doesn't leave much margin for error.
The main weak point in the design is likely the rather limp FET drivers, which probably causes quite a bit of heat to be generated due to switching losses. However the performance boost gained by using better drivers likely isn't worth the added cost.
If this design were to be re-engineered for brushed drive removing all the features that are redundant for brushless, and produced en-mass by hobbyking, they could probably sell it for around £15. Sadly there's not a big enough market for such an ESC, and the end price reflects that.
These ESCs have proven themselves over the years, and have gained a reputation of being almost unkillable in feather weight robots. As such they are one of the most popular controllers for the weight class.
Posted by Rory Mangles at 05:09